You know that dreaded moment everyone has when your vacation is over and you have to reenter the real world once again?  That is where we are.  Just sitting here, looking at pictures from a weekend filled with nothing but good times and tan lines, (cheesy, we know, but it’s so true!) mentally planning our next getaway.  But until then, we want to share with y’all just how epic our 4th of July Beach trip was!

The first day was pretty low-key. We stopped by the super small local grocery store to stock up on the essentials (snacks and piña colada mix) and then we spent a few hours at the beach wave surfing and day drinking. After that we treated ourselves to dinner at a local seafood restaurant, played a few rounds of Cards Against Humanity, and then called it a night (not super eventful, but we were just getting started!)

On day two we went to brunch at a local diner and then we headed to the beach once again (what can we say… it was calling our names). After a few hours at the beach we decided to go on a group bike ride to explore the island (some of us enjoyed the experience more than others… those bike seats hurt like a beach AMIRITE?!) Then we got started on our delicious dinner: Beaufort Stew! The first two days of the trip were pretty laid back, so by the time July 4th came we were ready to celebrate! 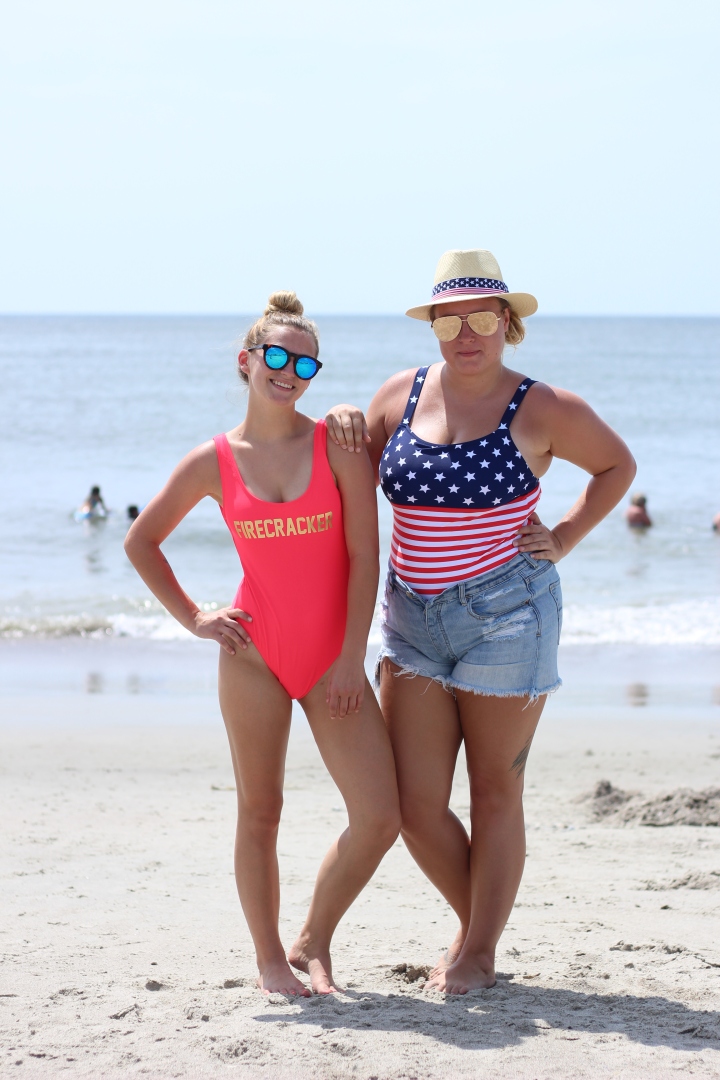 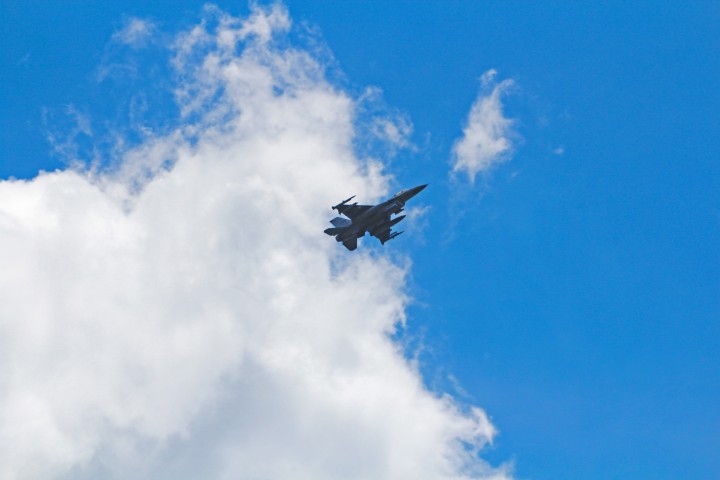 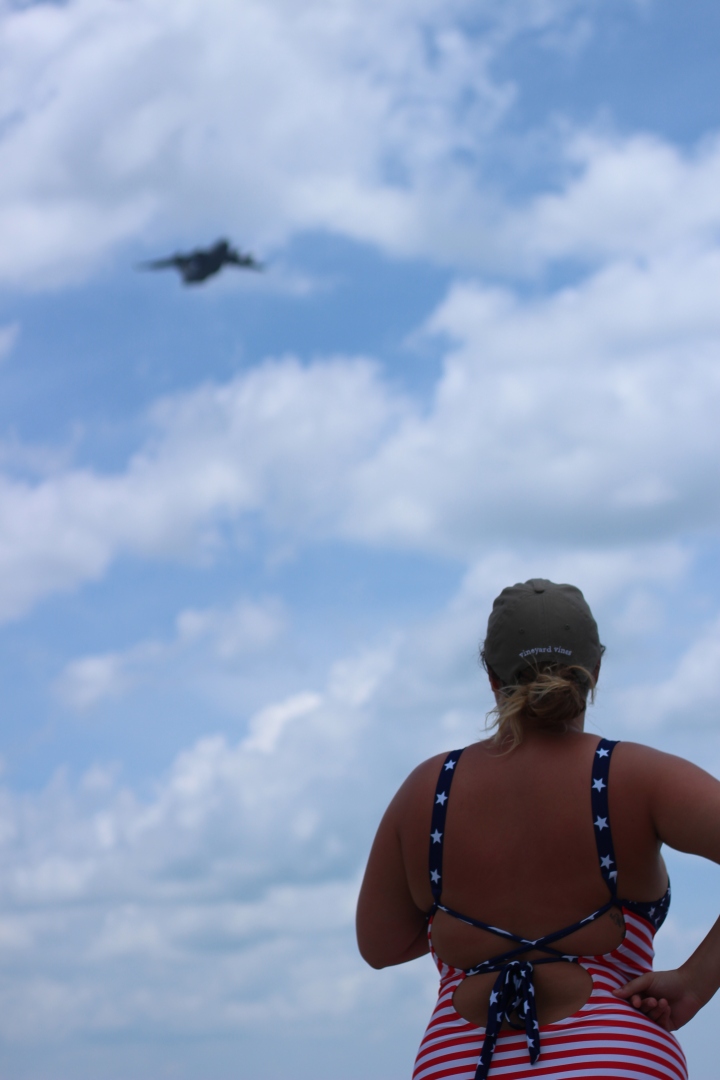 Tuesday was the day we were all waiting for {FOURTH OF JULY} and it started out, you guessed it, at the beach! (but really though, there isn’t much to do on Edisto Island BUT go to the beach).  So anyways, we got a pretty early start (low-key excited to rock our new bathing suits we got for the occasion which were not only festive but super affordable.  You can find Anna’s one piece here and one similar to Chelsea’s here), spent the morning in the water, (very impatiently) waiting for the annual fly over.  This was pretty cool to watch, there were a few F16’s, a C17, and a bunch of vintage war planes that cruised down the SC coast, starting in Cherry Grove.  After that we caught a few rays while snacking and listening to music.  We later packed up and headed back to the house to shower and grill out before that night’s firework show! 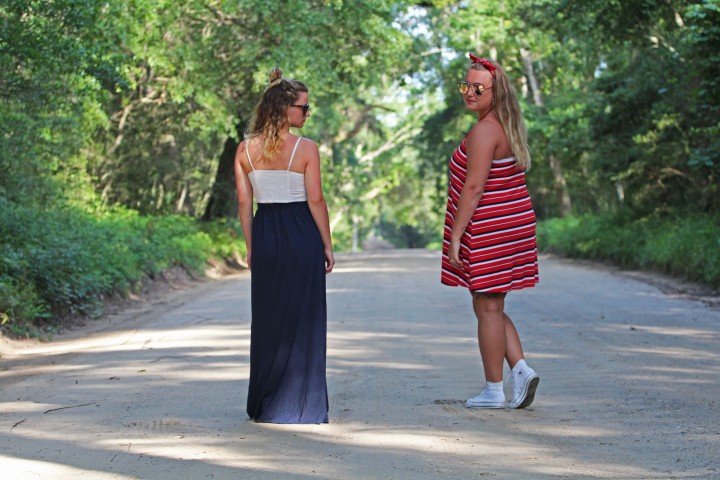 We decided to make the most of the holiday and do as many things as possible.  One of the most beautiful places on the Island is Botnay Bay road, so we just had to stop by for a quick photo-op.  Later that night we headed to the end of the Island for an awesome firework show where we managed to not only get chewed up by mosquitos, but also get some really great pictures of the fireworks!! (like the ones Anna’s boyfriend took above).  We ended the night by sitting on the couch saying we were going to watch Moana, but falling asleep instead (typical).  The final morning was spent dragging our feet to clean up and pack our bags, not wanting to head home but ready to see our pups!

Overall this trip was a great getaway for us to just relax and destress! Edisto was real good to us and we hope to go back soon! But for now it’s back to the real world, wishing we were day drinking without a care in the world.

I’m not even going to lie, when I saw snow on the forecast this week I panic ordered this puffer jacket because lord knows we don’t get snow enough for me to have a thick winter coat in my closet 🤪
Ready for Spring but not ready to give up all my shackets! Anyone else feel me on this?! I bought this cute little shacket the other day to add to what has now become a collection of shackets in my closet and I’m really not sorry about it🤪
New year, Same goals ✨
Have yourself a Merry little Christmas 🎄❤️
Starting to finally feel a little more festive the closer we get to Christmas 🎄 I don’t know what it was about the holidays this year but I have been slow to get in the Christmas spirit. From decorating to shopping to wrapping gifts, I have just been dragging my feet and waiting until the last minute to do everything. But the good news is we are finally getting caught up with all things Christmas and I think it’s safe to say I am ready for all the festivities this weekend!
All smiles over here because I am (almost) completely done Christmas shopping!! 🎁 And that is a really big deal since I have been in full on panic mode the past two weeks trying to figure out what to get all of my people.
Yall know the drill, hair day is my favorite day and a selfie in my favorite mirror in the salon is a must ✨
If anyone needs me, I’ll be shopping in the men’s section because this sherpa jacket might just be my most worn thing in my closet this season! It’s only $40 and so perfect for this confusing SC weather we’ve been having lately. You can shop it plus the rest of my outfit by following me on the LTK app
Oh my gosh, today has been one busy Sunday! The hubs and I took our Christmas card photos, finally got a Christmas tree, and knocked out some more Christmas decor around the house! I also might have even started scoping out some of the cyber Monday deals for tomorrow because I haven’t even begun shopping for Christmas presents yet 😬
I forgot to share with y’all this cutie little leopard dress I wore on our trip to the mountains a couple weeks ago. 🍂 I honestly forgot I even had it until I went to find something to wear to my in-laws Thanksgiving lunch today and saw it hanging in my closet and instantly knew I had to wear it again! It’s under $30 and so roomy, perfect to hide that Thanksgiving food baby 🤪
So when Jared and I were leaving the house earlier to go to lunch, I asked him if he liked my outfit and he’s said it was “kinda weird”. Flash forward to a few hours later when we were in Target and five people came up to me and told me they loved my outfit 😂 I made sure to make direct eye contact with him every time I got a compliment 😬 Haha! Anyone else’s SO love to comment on their outfit choices or is it just mine?
I think sometimes layering is triggering for me because of the aggressive layering I did in the early 2000’s 😂 but I’ve been giving it another go and I think I’m starting to be a fan of the layered look! What are y’all’s thoughts on layers and what are some of your favorite ways to layer?